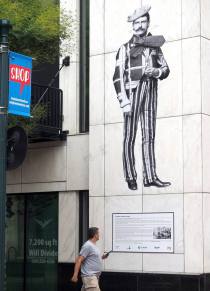 Is this cool or what?

On the right is a presentation by Mark Bugnaski, photographer (retired from the Kalamazoo Gazette) that was put on the building at the southeast corner of East Michigan and Burdick in downtown Kalamazoo.

On the left is a photo of the same corner around 1875. Orville’s studio was at 104 East Main St. on the second floor just below the “Business College” sign in 1902 when the Gibson Company was established.

The tribute will still be there for ArtHop in Kalamazoo on September 7. After that it will be taken down.

Gregg Miner has given me a shout out in his article “A Lost Scroll of the Ages” which appears in the Spring issue #41 of the Fretboard Journal. More importantly is his reference to the Gibson booth at the 1904 World’s Fair in St. Louis. Gregg and I both believe that in the beginning, Orville was “the company.” No cabinet maker can walk in the door and produce the exquisite workmanship of an experienced luthier such as Orville. The learning curve is simply too great. This affects dating and attributing the true maker of the earliest company instruments.

Read his blog post about the Gibson display at the 1904 World’s Fair in St. Louis here…

This photo of Orville’s work bench was taken by professional photographer Henry G. Dornbush in 1900 and appeared in the Aug/Sep 1937 issue of Gibson’s in-house magazine “Mastertone” along with a written article. It also appeared in Julius Bellson’s 1973 book, “The Story of Gibson.” It was taken at Orville’s studio at 104 East Main Street.

Henry was the forth of five sons born to Geert Doorenbos. The family emigrated to the United States from The Netherlands in 1881 when Henry was about two years old. In 1894, at the age of 15, Henry apprenticed at the photographic studio of Frank P. Ford at 119 South Burdick. By 1896, Orville had moved into a studio across the street. This is probably when and where Henry met him.

Orville had been advertising instrument repair since at least 1897. The photo shows two instruments on the far right, one small guitar and one mandolin/banjo, that he must have been repairing for customers.

Also, note the violin rib garland hanging on the rack at the center of the photo and the lyre pattern hanging on the wall above. Evidently, Orville had been making violins and lyre-mandolins by 1900.

The photo also shows a collection of hand saws and metal C-clamps hanging on the rack. A large case of awls and chisels leans against the wall. The F-style mandolin on the left sits on top of a small wooden case. And a pitcher and small glass bottle sit on the table at the far right.

The photo also shows what appears to be a guitar case laying below the guitar on the left.

In all, this photo shows four A style mandolins (one is on a stand just inside the left edge of the photo), three F style mandolins, two guitars, one violin rib garland, one lyre pattern, and two non-Gibson repairs. All this production at one moment in time in 1900. Thank you, Henry Dornbush.

Joseph Bistolfi, a touring musician born in Italy and living in the United States, was one of Orville’s best clients. He commissioned his first Gibson, an 18 string harp guitar for which he paid $150.00, in November 1900.

The instrument body was made of Brazilian walnut, the top ebonized Washington cedar. It also had intricate mother of pearl inlays. This harp guitar took Orville 30 days of continuous work to complete at his East Main Street studio and was reportedly the seventh of its kind that he had made.

Unfortunately, the harp guitar in the photo is not the one commissioned in 1900. Mr. Bistolfi lost his cache of musical instruments along with all his worldly belongings in a Pennsylvania boarding house fire in 1905. More than likely his Orville made harp guitar was amongst those destroyed. Having returned to his room late at night, he was able to warn all other residents in time to get everyone out safely. The boarding house was reduced to ashes.

Even though the Gibson Mandolin-Guitar Manufacturing Company had been making instruments for about two years by 1905, I seriously doubt that Mr. Bistolfi would have accepted a replacement piece that wasn’t made exclusively by Orville himself. I feel Orville would have also insisted upon it. Gregg Miner has dated the one in the photo to early 1906.

By September of 1897, Orville had moved his studio to a larger space on the second floor of 104 East Main. In the photo, it’s the second building from the right below where the ‘Business College’ sign hangs. This studio was above the Foster & Post five and dime store.

Among Orville’s output by this time was two complete sets of instruments, one for his own Orpheus Mandolin Club and one for the John W. McLouth Ideal Mandolin Orchestra.

Orville had previously advertised in the newspaper, but at this point he also placed a pictured ad in the 1897 Kalamazoo City Directory. This advertisement also answers my question as to whether he had an exhibit at the 1893 World’s Fair.

The first annual Kalamazoo Street Fair took place October 12-13-14 of 1897. Since his studio was on the second floor, Orville probably displayed his instruments and wares on the sidewalk below as did many other merchants.

From 1896 to at least March of 1897, Orville’s studio was on the second floor of 114 South Burdick Street (the building on the far left). This is where he completed the set of instruments for the John W. McLouth Ideal Mandolin Orchestra.

This photo was taken in 1907 during the construction of the Kalamazoo National Bank (the line running from top middle to bottom right is a crack in the photo plate).

Orville applied for his patent on May 11, 1895. Three months later, in August, this article appeared in the Kalamazoo Telegraph. The editor of the Telegraph was William L Eaton, a fellow stage brother of Orville’s who often wrote about and reviewed their stage activities. Taking this relationship into consideration, I feel the information in this article can be taken at face value.

Why Orville did not remain the in-house luthier at The Barrow’s Music Company is not known. But there are clues as to what may have been the reason. In 1891, Barrow’s became the Michigan selling agent for Waldo banjos and guitars. In 1895, they began manufacturing the Waldo brand themselves. This may have been a point of contention between Orville and Barrow’s as to whose name and whose design would prevail.

The length of time Orville was employed by Barrow’s is not known. It might have been a day, a week, or maybe a month. But in the September Saginaw newspapers, Barrow’s was still advertising the Waldo brand and design. My guess is that this information is buried somewhere in their business records, if those still exist.

Barrow’s  continued to manufacture a more traditional line of instruments and was later reorganized as the Waldo Manufacturing Company.

From his studio in Kalamazoo, Orville continued to flourish as an individual craftsman and serve an ever growing elite clientele.

Through his attorney, Lucius C. West, Orville applied for his mandolin patent on May 11, 1895. Entitled “Mandolin,” the patent states that it pertains to

mandolins, guitars, mandolas and lutes. If Orville had applied for it at the height of a guitar craze it may well have been entitled “Guitar.”

The patent was granted on February 1, 1898. So, why did it take three years for his patent to be granted? The answer lies with the United States Patent Office.

For a time, the USPO had changed their criteria for granting patents. Previously, they had granted patents on common knowledge alone. They changed their process to actually doing research to see if they could locate the same invention by someone else. This may account for the three year delay in it being granted.

The USPO eventually went back to granting patents on the basis of common knowledge alone and new patents were, once again, granted and issued within a few months of being filed.

Former Gibson employees have said they were told Orville perfected his instrument-making in his garage. After further research, it turns out that when Orville applied for his patent, he lived at 318 South Burdick St. which had a large garage-like structure attached to the back of the residence.

Orville’s studio, 1895. The white house at the left edge of the photo is 318 South Burdick. There is an elongated addition on the back. And attached to that is a long garage-like structure of which the long, low roof can be seen behind the tree on the right.

This photo was taken in 1891 when the new post office was being built at the southwest corner of Burdick and South Street. In the foreground, bricks can be seen stacked neatly encircling the building site. Within its parameter, the foundation was being dug by hand. The Post Office had been completed by the time Orville lived at this address.

Among the various bands that Orville was a part of during his career, was his own Orpheus Mandolin Club.

On February 5, 1895, after two postponements, The Academy of Music hosted a night of music and vaudeville headlined by The Bronson Minstrels. They were managed by local band conductor Chester Z. Bronson.

This handbill lists those who performed for the Olio (a collection of acts, typically local, that perform during the intermission of a minstrel show). The Orpheus Mandolin Club was called back for an encore and as noted, all of their instruments were made by Orville. Three months later, he would apply for his patent.

In 1887-88, Orville resided in The Fuller Block at 143 South Burdick Street. In the photo below, the International Hotel is the corner building that sits in the foreground. The Fuller Block is the next building up the street with the four bay windows, three with the awnings outstretched.

This building is important for many reasons. With this address, Orville had changed from living in local boarding houses to his first residence among the downtown businesses, probably because it provided a larger, more suitable working space.

When Orville lived at this address, he was experimenting with the construction of stringed musical instruments that he himself played. So, it can be deduced that by 1887-88 he had mastered the luthier processes to the point of successful experimentation. At this time, he was also considered to be one of Kalamazoo’s most eligible bachelors.

On the ground floor of The Fuller Block was Butters’ New Central Restaurant. Orville would work for Mr. and Mrs. Frank Butters in about five years (around 1893), after they had moved their restaurant up to Main Street. The Fuller Block had its own water well in the basement and may have had gas lighting.

In 1909, The Fuller Theater was built onto the back of the Fuller Block. The entrance was through the right hand side (south door) of the building. It was managed by Leroy Hornbeck, founding manager and stockholder of the Gibson Company.