Where did the Gibson Company get their first employees? This ‘help wanted’ ad appeared in an Indianapolis newspaper in 1903. This also confirms that, early on, the company was using celluloid and doing their own pearl inlays.

One of the earliest known factory employees was George Altermatt, an instrument maker from Chicago. George moved to Kalamazoo with his wife and two children sometime in late 1903 or early 1904. Considering his previous experience, he may have had an easier go of it compared to the newly hired cabinet makers or woodworkers.

Shown here at his work station at the Parsons Street factory, Mr. Altermatt helped produce the line of Gibson violins.

More early Gibson Company employees. This photo was probably taken at the back of the (relatively new) Parsons Street factory where the kiln was located. 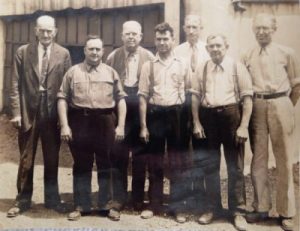 Ed Howard was manager of the company baseball team, the Gibson Mandolines, which was part of the factory leagues in Kalamazoo.

Eugene Weed and George Altermatt can be seen in some of the earliest company photos that have been reproduced in magazines and journal articles.